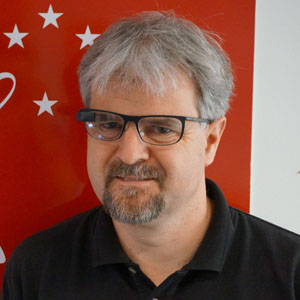 Prof. Mark Billinghurst has a wealth of knowledge and expertise in human-computer interface technology, particularly in the area of Augmented Reality (the overlay of three-dimensional images on the real world).

In 2002, the former HIT Lab US Research Associate completed his PhD in Electrical Engineering, at the University of Washington, under the supervision of Professor Thomas Furness III and Professor Linda Shapiro. As part of the research for his thesis titled Shared Space: Exploration in Collaborative Augmented Reality, Dr Billinghurst invented the Magic Book – an animated children’s book that comes to life when viewed through the lightweight head-mounted display (HMD).

Not surprisingly, Dr Billinghurst has achieved several accolades in recent years for his contribution to Human Interface Technology research. He was awarded a Discover Magazine Award in 2001, for Entertainment for creating the Magic Book technology. He was selected as one of eight leading New Zealand innovators and entrepreneurs to be showcased at the Carter Holt Harvey New Zealand Innovation Pavilion at the America’s Cup Village from November 2002 until March 2003. In 2004 he was nominated for a prestigious World Technology Network (WTN) World Technology Award in the education category and in 2005 he was appointed to the New Zealand Government’s Growth and Innovation Advisory Board.

Originally educated in New Zealand, Dr Billinghurst is a two-time graduate of Waikato University where he completed a BCMS (Bachelor of Computing and Mathematical Science)(first class honours) in 1990 and a Master of Philosophy (Applied Mathematics & Physics) in 1992.

Empathic Computing for Experiential Telepresence: Beyond the Metaverse

In this talk I will talk about the emerging research field of Empathic Computing and how this can be used to create systems that develop deeper understanding between people. Using AR and VR technology, combined with physiological sensing, people can understand what other people are seeing, hearing and feeling, creating a strong sense of empathy. Using this technology the Metaverse will go beyond being a place where we see one another, to a place where we can be one another and create a deep emotional connection. The talk will highlight the work of the Empathic Computing Laboratory and others as they develop experiential telepresence technology, and discuss how this can be used in a Humanity First approach to addressing pervasive problems.